The six students selected for the 2018-2019 Citizen Scholar Award were chosen based upon their dedication to the Public Affairs Mission of the university through coursework, activities, and service-learning opportunities. 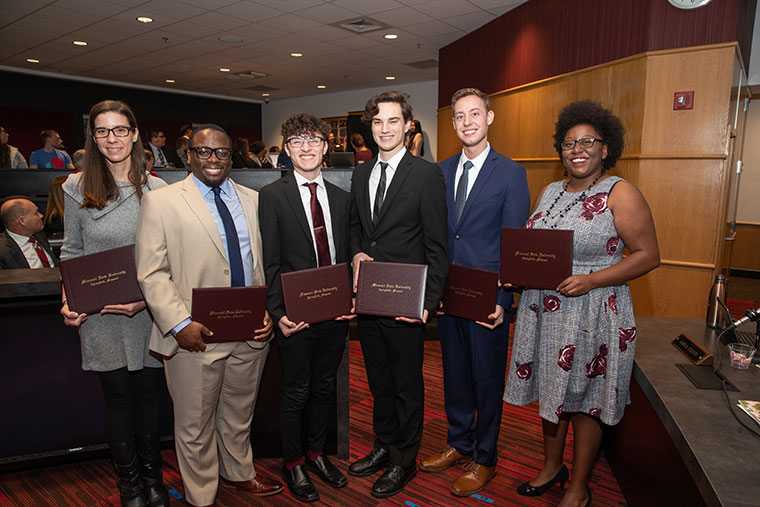 Tia is a senior from Springfield, Missouri. She is majoring in Civil Engineering. Following graduation in December 2018, she hopes to be working at Olsson, a local engineering firm, designing water and wastewater treatment plants for Southwest Missouri. She is currently an intern at Olsson and enjoys helping people gain access to clean water. Dr. Matthew Pierson, Associate Professor of Civil Engineering, nominated Tia because, “Tia has demonstrated excellence in all of the areas of a well-rounded and civically minded student: leadership, character, academics, and attainment of personal and professional goals… She is a non-traditional student with a family and a job, yet Tia regularly produces the best solution to problems in class. Her willingness to speak out and interact in class is very helpful to everyone’s learning experience.”

Tyree is a graduate student from Raytown, Missouri. He received a Bachelor of Science in Administrative Management and Interpersonal Communication from Missouri State University before being accepted into the Master of Health Administration Program. Tyree plans to begin his career after graduation, and he eventually hopes to become the Secretary for Health and Human Services of the United States so that he may help to eliminate health disparities in this country. His nominator, Tara Benson, Associate Director of the Plaster Student Union and Director of the Office of Student Engagement, expressed, “I have worked with Tyree for the past two years in various leadership capacities and during that time, have grown to admire and appreciate his commitment to Public Affairs and Missouri State University… Tyree spent many hours advocating for students wants and also bringing university business back to students.”

Koby is a junior from Battlefield, Missouri. He is majoring in Biochemistry with a minor in Mathematics. Post-graduation, he hopes to pursue an MD/PhD dual-degree and eventually go on to become an oncologist with his own lab. He has also considered running for public office or other positions within the federal government. Koby’s nominator, Travis Schilla, the Coordinator of Leadership Development and Programming, wrote, “As a student leader at Missouri State, Koby’s passion for active citizenship has led him to deep engagement within the campus and Springfield communities. He is the epitome of an engaged citizen, and inspires others to similarly invest within their community. In my work with Koby, I have found him to be a confident and thoughtful individual with unlimited potential.”

Anthony is a senior from West Plains, Missouri. He is majoring in Sociology with a minor in Anthropology. Following graduation, he plans to take part in a joint PhD program in Sociology and Public Policy and eventually become a professor of Sociology. Anthony’s nominator, Dr. Dennis Lancaster, Dean of Academic Affairs, wrote, “I believe his time at Missouri State University…has allowed Alex to grow, learn, and change; but it has been his willingness to deeply engage in the academic and service life of the University and, in doing so, to lead others toward looking outside of themselves to a larger world in need of his mind and heart that has allowed Alex to influence the growth, learning, and change of the University.”

Husref is a senior from Kansas City, Missouri.  He is majoring in Biology, Microbiology, and Biotechnology with minors in Chemistry and Psychology. The next step in his career is to attend a Missouri medical school and become a physician that serves the Missouri community. His nominator, Dr. Kyoungtae Kim, Associate Dean of the College of Natural and Applied Sciences, expressed, “Husref has gained many insightful ethical leadership skills through Missouri State’s various leadership opportunities that he has been able to take back and incorporate in the various organizations that he is a part of…Being a leader in so many different organizations, he has had to also incorporate being culturally competent and understanding of the different walks of life present all throughout campus, and not only to be mindful of their existence, but rather take strides in making them feel more welcomed and engaged in what they try to pursue.”

Daezia is a graduate student from Murfreesboro, Tennessee. She received a Bachelor of Arts in Global Studies and is now pursuing a Master of Global Studies degree with an emphasis in comparative politic and international relations. Her future plans include joining the Peace Corps or spending at least one year abroad participating with organizations that focus on human rights and education. After that, she would like to dedicate her time working with non-governmental organizations serving the same areas. In explaining his nomination of her, Brad Bodenhausen, Associate Vice President of International Education and Training, stated, “Daezia Smith stands out from other strong students because she is a thinker and a doer. Daezia has the ability to cast a vision for something that is new and needed on campus – and then she works tirelessly, with patient determination and energetic persuasion, to make that vision a reality.”