The six students selected for the 2012 Citizen Scholar Award were chosen based on their dedication to the public affairs mission of the university through coursework, activities and service-learning opportunities. 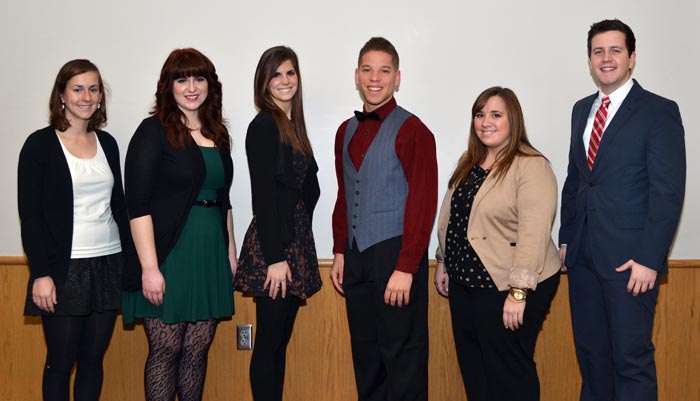 A senior biology major from St. Louis, Lauren was nominated by Dr. Alexander Wait, who said of her dedication to science: “Lauren is a student who will make significant contribution in the area of science and be a leader in her community and workplace in advocating for social, environmental and economic sustainability.”

A senior broadcast journalism major from West Plains, Amber was nominated by Dr. Gary Phillips. Dr. Phillips said, “Instead of ‘getting lost in the crowd,’ Amber has maintained the characteristics that are consistent with being a Citizen Scholar. She has demonstrated leadership qualities and excellent moral character.”

A senior civil engineering major from Springfield, Bethany plans to use her degree to pursue a career in water treatment and assist with projects in developing countries. Nominator Stephanie Murhphy said, “Bethany is consistently going above and beyond normal standards to improve her community and the lives of those who are less fortunate.”

A junior biology major from Neosho, Anthony plans to pursue a master’s degree in marine conservation to eventually work for a non-profit conservation agency in South America. Nominator Angela Plank said, “Being a passive participant in his education and community are completely foreign to Anthony.”

A senior agricultural education major from Urbana, Casteel was nominated by Jim Bellis, who said of Casteel’s impact on other students: “I venture to say that at least half the students in the last three School of Agriculture’s freshman class would say their lives were touched by Casteel Kirk.”

A senior socio-political communication major from Springfield, Scott plans on attending law school and hopes to work as a leadership and education consultant for Theta Chi Fraternity. Nominator Dr. Gloria Galanes said, “Scott is an extraordinary young man with exceptional maturity who demonstrates leadership capabilities far beyond his years.”